Tirado’s studies and abilities developed in Venezuela , where he debuted with his first art pieces. These paintings placed him in many city Galleries were many critics admired his talent. However, Tirado Yepes felt that his art was being produced almost in mass, without taking artistic risks, and trying to please the eye of a not-too art fanatic public. But the inner child within this wonderful artist took him to explore new artistic horizons. After becoming tired of producing the same type of paintings over and over, as if it was an automobile factory, Tirado started studying and experimenting with new materials and geared his abilities towards sculpting, although he was not certain where this new venture would take him. There were too many years with the same strokes, same colors, same subjects, and again, the child within felt tired and did not know what to do with his toys…his art pieces remained as drafts, samples, but nothing final.

This was the moment when Tirado decided to change residences and moved to Florida, USA . For a while, he worked in other areas but continued to create beautiful paintings and even exhibited them in some local gallerias that appreciated his true talent. It is when he found a job as an Art Professor at the South Florida Art School that the lost child within Tirado  found his way and decided to take that big step that radically took him far from his past art productions.

At last, his rebellious spirit was liberated; now, his landscape and mountain paintings from his homeland would appear too commercial and figurative. His new art pieces like “Pablo Picasso” and “After Mona Lisa” were considered almost a suicidal artistic risk by those who new his initial paintings, but Tirado’s self confident hands knew where he was going and caused an impact in the public eye. These unexpected pieces of art told an intimate story of the artist, without colorful shapes that could confuse the spectator.

In contrast, there were different shades of black and grey to help the public connect emotionally with what the artist created on the canvas. Pebbles, sand, paint and other elements were used to express all those feelings stored in the corners of the hearts, and to awaken feelings fringed by negligence or apathy.

The artistic interest of Tirado in industries, toys, the simplicity and direct message of graphic art, his critical eye for Folk Art, in addition to his experience, all resulted in the artist taking a big step, where he was able to show his soul, without distractions, disguises or façades. He embarked on a journey to an uncertain future, but with his heart embraced by hope. He knew he was not invincible, but the truth is that no one ever is. The future will not be enjoyed by sitting on a couch, but by traveling the roads, paving the way with wonderful art that will make his journey easier to him and on those who follow his art work. 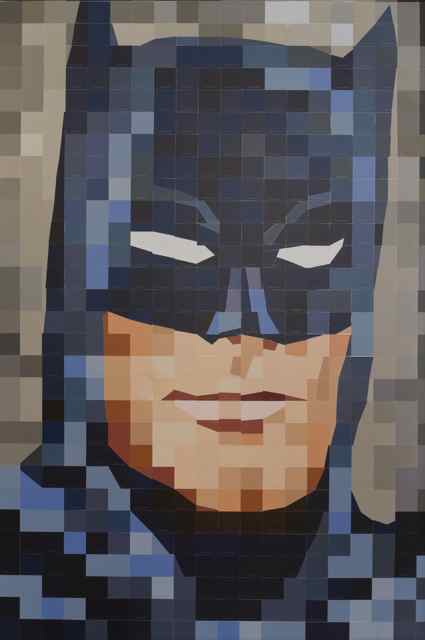